Home » TYPES » Shrubs » Hymenolepis crithmifolia browned in seed setting
Back to Category Overview
Total images in all categories: 11,901
Total number of hits on all images: 7,141,743 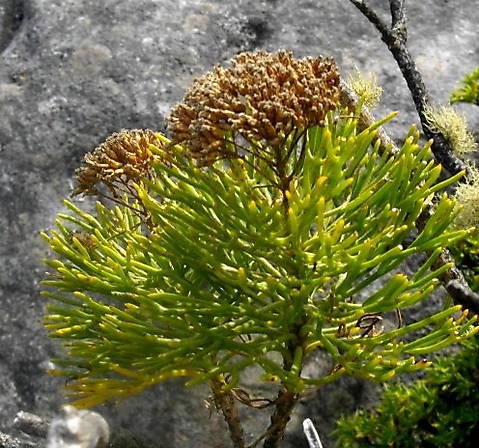 Each fruit or cypsela of Hymenolepis crithmifolia is dry and one-seeded, gathered here in small brown clusters that started off as small flowerheads, joined in one large inflorescence, a flat-topped corymb.

In each head the fruits are held together by the surrounding calyx sheath. This lasts until ripeness equals readiness for the wind to take them. Travelling light, attached to a small pappus, the seed flies off to a new life, if it can make it. It represents its own kind but also all kinds of plants that flower, seed and germinate on earth. It is related to them all, albeit that the kinship is mildly to extremely tenuous across the range of families and species.

Flight dispersal at the opportune moment for departure arrives after the brown, post-floral corymb is thoroughly dried, aided by the summer sun on the Cape fynbos.

The bunch in picture is special, grown on Table Mountain where a yellow-flowering bush can in season be seen from afar by people, butterflies, bees and many other interested parties, friendly or hostile. In nature every stem-tip bunch of flowers is special, holding promise until its fate is sealed, no matter where it grew.

Eventually the brittle, dry structure of corymb components succumbs to wind and other disruptive mishaps, for its time is up. Losing parts gradually, combined with the loosening of the calyx grip are all within the grand plan of slow seed release.

Should poor timing hit some departing seeds, their bad luck will mostly affect only those leaving at the wrong time. In "managing" life in the real world of ecological integration, nature is the master of chance. It deals with the complex fortunes of all life forms, always committed to diversity as the key to preserving life in the possible forms of the moment, rather than any particular living things.

Nature plays the long game in dealing with single-species bullies that for a time might seem to obliterate their opposition, ironically also their resources. That’s why people have to fight so hard in countering scourges like bubonic plague, smallpox, HIV and Covid. All of these are or were living species evolved on earth at various times, putting other species, including Homo sapiens, in their place and growing "personal" space. Dominance is neither permanent nor the prerogative of any species like people, oft blinded by some short-term successes in spite of brain power.

This is nature's way of stucturing the game of life: preserve life itself first and foremost, not any species as such and definitely not individual specimens of anything. Those are mere temporary, functional units, driven in short-term life patterns, prodded to hurry into procreation before they die. All species are contestants in the survival game, all armed with some or other competitive attributes for use against other species found in their ecological niches.

Nature has many ways of putting diverse life before the rights of any favourites among the living at any time. Does Homo sapiens stand a chance in this "poker" game, given its brain that has disrupted so much, against nature that backs life over any species? The long game of life on earth has survived all species so far, domination occurring only in finite intervals, new rivals always testing skills and flexing muscles for moments of weakness spotted anywhere... and there are so many eyes watching everywhere!

Nature has time for every gutsy underdog that plays hard, not only for self-crowned kings. Many "dogs" get their day (or many days), depending on their specific internal resilience, as well as prevailing external conditions, which for every species is a surprise packet with finite a time scale.

Winter rain finds the H. crithmifolia seeds ready for germination in a gamut of new, wind-blown home spots, dictated by fortune. Those homes or chance landing spots may be viable or not, as unequal as life itself, but almost always good for some, until...