Home » TYPES » Shrubs » Hirpicium integrifolium flowerhead before opening
Back to Category Overview
Total images in all categories: 11,912
Total number of hits on all images: 7,163,199 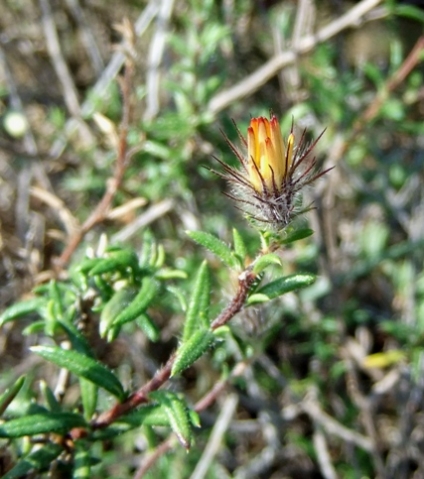 The flowerhead of Hirpicium integrifolium has a daisy shape, orange-yellow in both the ray and disc florets. Ray florets ascend around the disc, spreading to about 3 cm in diameter. Long, dark maroon bristles occur on the tips of the bracts of the involucre below the corolla. The involucre is narrow; the bracts growing in about three rows are linear and covered in long white hairs. Flowering happens in spring and summer after rain.

The leaves of H. integrifolium are lanceolate to linear with acutely pointed tips, also tapering at the base. Leaf surfaces are bright to dark green, sparsely covered in white hairs on their upper surfaces, white and woolly below. The leaf margins roll under strongly. The leaf midrib is sunken on the upper surface, the petiole short, partly stem-clasping or nearly absent. Leaf positioning on the stems is sub-opposite, not quite alternate (Vlok and Schutte-Vlok, 2010; JSTOR).