Home » TYPES » Shrubs » Heterorhachis aculeata open flowerhead
Back to Category Overview
Total images in all categories: 11,769
Total number of hits on all images: 6,918,772 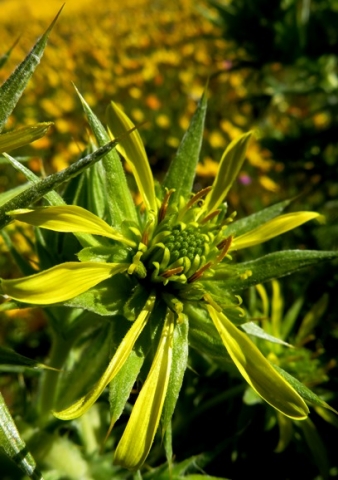 Both the ray and disc florets in the Heterorhachis aculeata flowerhead are pale yellow in their prime. One sparse ring of rays spreads around the central disc, positioned above the bracts but not quite as long as the widest bract tips immediately below them. The spreading bracts hold their flat upper surfaces more rigidly in position than the rays as they taper into their spiny tips.

The rays are narrowly oblanceolate, soft-textured but variably functional in keeping their blades in position for pollinators to be guided in for landing. Maybe that service is better left for the bracts to perform. The sterile rays are faintly glandular-haired and have three or four tiny teeth at their tips.

The outer disc florets are open, their pointed, petal lobes curving out. Some have long, thin, cylindrical anthers, dull yellow to pale brown protruding from their centres. The disc florets are fertile, bisexual, although both components are not usually visible at the same time. In the centre the inner, unopened disc florets stand erect, their still pale green heads close together.

Flowering happens late in winter and early in spring. The photo was taken in August on the flower farm at Matjiesfontein near Nieuwoudtville (Leistner, (Ed.), 2000; Bond and Goldblatt, 1984; iNaturalist).