Home » TYPES » Shrubs » Gloveria integrifolia
Back to Category Overview
Total images in all categories: 11,538
Total number of hits on all images: 6,617,269 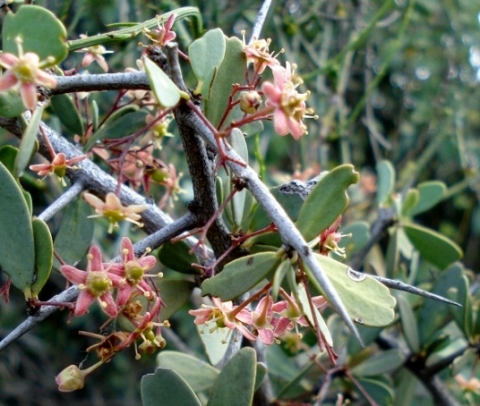 Gloveria integrifolia is a much-branched, spiny shrub reaching 2 m to 3 m in height and maybe in width. Although not often thought of as a tree, it is a numbered item in the South African Tree List (No. 403.9).

The genus is monotypic. It may be mistaken for Gymnosporia, another genus of the Celastraceae family to which both genera belong. Gloveria has bisexual flowers though, while Gymnosporia species produce the sexes in different flowers.

The leaves grow in fascicles or are clustered on dwarf spur-branchlets. Leaf-shape is elliptic to obovate, the tip rounded, sometimes notched, occasionally pointed. The leaf colour is blue-green or grey-green. Leaf texture is thick and fleshy, the leaf surfaces hairless and smooth.

The flowers of Gloveria integrifolia are small five-pointed stars. The petals are almost oblong, the tips rounded. Flower colour is cream, pink or red. The flowers are about 7 mm in diameter, growing on slender stalks. Blooming commences in mid-spring, lasting until early summer. The flowers are unpleasantly scented.

The plants are found in two discrete distributions, the one in the Western Cape and Little Karoo, the other near the coast in Namaqualand.

The habitat is karoid scrub in shale-derived soils. The species is not considered to be threatened in its habitat early in the twenty first century (Vlok and Schutte-Vlok, 2015; Coates Palgrave, 2002; http://redlist.sanbi.org).