Home » TYPES » Shrubs » Garuleum bipinnatum
Back to Category Overview
Total images in all categories: 12,082
Total number of hits on all images: 7,379,586 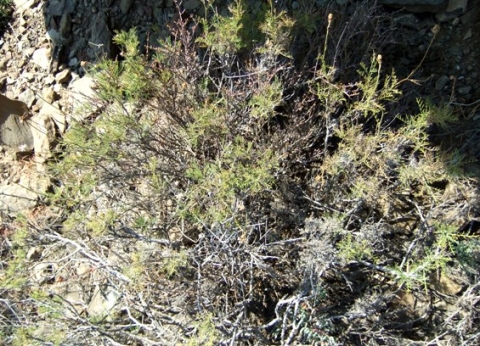 Garuleum bipinnatum, in Afrikaans known as the slanghoutjie (little snake wood), is an aromatic shrub. It has pale grey branched stems.

The distribution is inland in the Western Cape, in the west of the Eastern Cape and the south of the Northern Cape. This plant was seen near Oudtshoorn in the Little Karoo where the species is most common.

Slanghoutjie grows to 50 cm in the more parched parts of its distribution and to well over 1 m where conditions are favourable. The plant is mostly seen on semi-arid northerly slopes and rocky outcrops, adapted in a variety of soil types. The species is not considered to be threatened in its habitat early in the twenty first century.

The slanghoutjie name originates from a snakebite remedy that used to be concocted from this plant by the early settlers. Some other medicinal uses are also mentioned in the literature (Vlok and Schutte-Vlok, 2010; Shearing and Van Heerden, 2008; www.plantzafrica.com; http://redlist.sanbi.org).