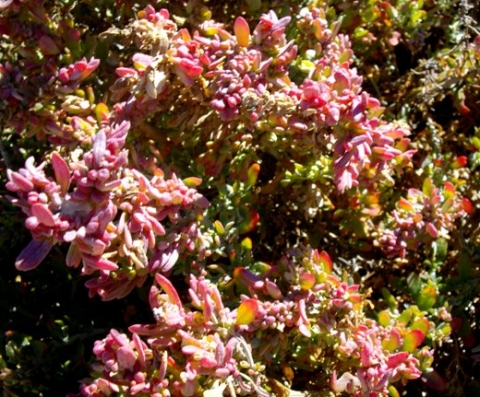 The leaves of Exomis microphylla var. microphylla may seasonally develop an overly red, stressed appearance as in this photo. Lower leaves getting less sun are not much affected. They have more chlorophyll molecules, but less sun, begging the question as to where the more photosynthesis will occur.

Another variety of the species, E. microphylla var. axyrioides, tends to invade in parts of the Eastern Cape. The seeds are favoured rodent food, the animals contributing to its highly efficient dispersal.

Exomis is a monotypic genus comprising only the one species with two varieties. It is the only genus of the Chenopodiaceae family endemic to South Africa (Gledhill, 1981; Riley, 1963; iSpot; Andrew, 2012).