Home » TYPES » Shrubs » Ecbolium glabratum
Back to Category Overview
Total images in all categories: 11,026
Total number of hits on all images: 5,667,106 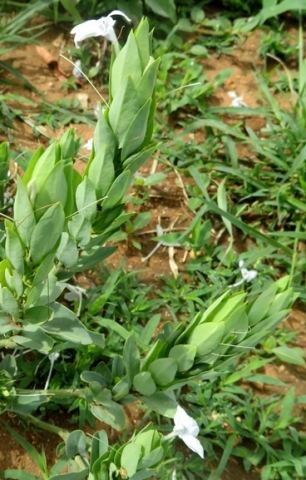 Ecbolium glabratum is an erect shrublet of the Acanthaceae family that may reach 90 cm in height. The stems, pale or yellow-green compared to the blue-green leaves, branch much at the base, bearing their tips erectly.

The specific name, glabratum (Latin), means to make smooth, to deprive of hairs or bristles, referring to the (almost) hairlessness of the plant.

The long, white threads protruding from among the leaves appear to be persistent styles of old flowers that have lost their corollas.

The species is distributed in the far northeast of South Africa, in northern KwaZulu-Natal and eastern Mpumalanga; also in Swaziland and Mozambique if not further afield.

The habitat is thicket, savanna or woodland, as well as disturbed ground. The species is not considered to be threatened in its habitat early in the twenty first century.

There are 22 Ecbolium species in Africa, Madagascar and Asia, two of them occurring in South Africa. The other South African one is E. flanaganii growing along the Eastern Cape coast (Pooley, 1998; Leistner, (Ed.), 2000; iSpot; http://redlist.sanbi.org).