Home » TYPES » Shrubs » Dissotis princeps purple flowers
Back to Category Overview
Total images in all categories: 11,662
Total number of hits on all images: 6,774,724 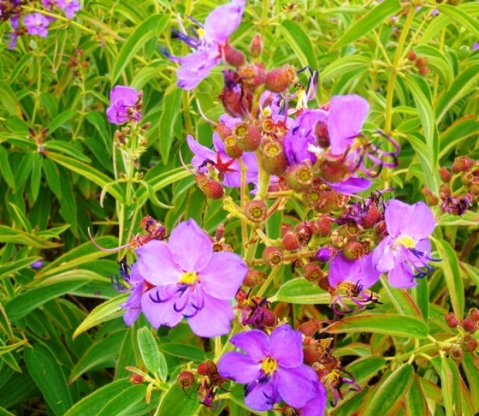 The stamens grow in two groups of five. The groups differ in appearance, although their structures are roughly similar. The name Dissotis is derived from the two types of stamens present in each flower. The light-coloured, creamy filaments are curved and attached to pink "connectives" to the blue-purple anthers. The anthers are 1 cm in length and have a crinkled appearance when mature.

The five pink calyx lobes clasping the flower base persist after the petals have dropped off. The fruit capsule grows within the calyx. Many small seeds are released when the capsule is ripe.

The plant belongs to the Melastomataceae or tibouchina family comprising dicotyledonous flowering herbs, shrubs and small trees. Many of these plants are found in the South American tropics and most of the species exist in warm and wet habitats. A few of them have become invaders, while several are cultivated for their large bright flowers (Wikipedia; www.plantzafrica.com).