Home » TYPES » Shrubs » Dicoma tomentosa
Back to Category Overview
Total images in all categories: 11,792
Total number of hits on all images: 6,949,097 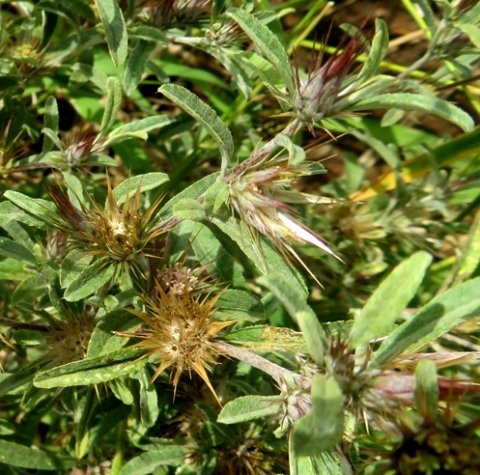 The alternate leaves ascend on short petioles from the hairy, purplish stems. Long and narrow, the leaf shape is oblong to elliptic with rounded tip and tapering base. The leaf folds in along its midrib, the margins entire. The leaf colour is pale grey-green covered in short, whitish hairs on the upper surface, grey and felt-like on the lower one.

The species is distributed in Mpumalanga and Limpopo and widespread in Africa and Asia. It grows in the Kruger National Park; this plant was seen in the Mjejane Game Reserve to the south of the Park.

The habitat is hot and dry grassy floodplains, the plants growing in sandy soils or rocky places, sometimes invading disturbed areas. The species is not considered to be threatened in its habitat early in the twenty first century.

The plant is said to feature in traditional medicine in various applications (iNaturalist; www.zimbabweflora.co.zw; http://redlist.sanbi.org).