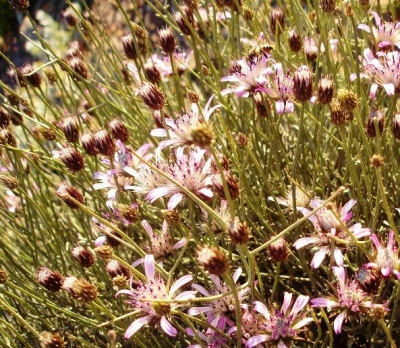 Dicoma picta, in Afrikaans commonly known as knoppiesbos (little knobs bush) or knoppiesdoringbossie (little knobs thornbush), is a twiggy shrub that grows grey and green-streaked stems to heights around 1 m. It has plenty of pretty flowers usually after rain.

The plant is drought resistant, partly on account of its low leaf count; the leaves dropping off as soon as the drought starts. Photosynthesis mainly takes place in the many stems of D. picta. The plant conserves water due to the low number of leaf stoma through which water would escape, thus reducing transpiration.

The species distribution is in the Western and Eastern Cape from the Cederberg Mountains to Uitenhage. The plant grows in clay soils on semi-arid, stony slopes. The species is not considered to be threatened in its habitat early in the twenty first century (Vlok and Schutte-Vlok, 2010; www.bidorbuy.co.za; www.redlist.sanbi.org).