Home » TYPES » Shrubs » Dichapetalum cymosum
Back to Category Overview
Total images in all categories: 10,845
Total number of hits on all images: 5,499,092 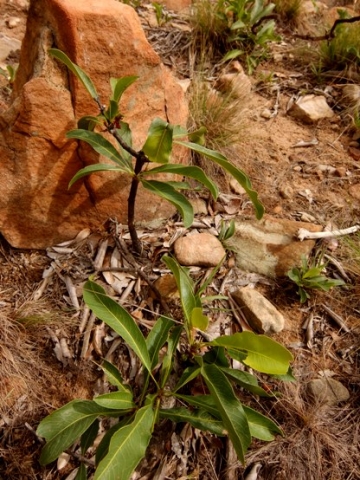 The above-ground stem-tip parts are short and woody, not bothering with size, but merely producing leaves to photosynthesise and flowers to reproduce. A visible stem may reach 45 cm.

The species distribution is widespread in the northern parts of South Africa, from northern KwaZulu-Natal and north of the Vaal River to Botswana, as well as Mozambique, Zimbabwe, Namibia and southern Angola.

The habitat is subtropical woodland and grassland in dry, acidic, sandy soils, absent from clayey or marshy areas. The species is not considered to be threatened in its habitat early in the twenty first century (Vahrmeijer, 1981; Pooley, 1988; Wikipedia; www.redlist.sanbi.org).