Home » TYPES » Shrubs » Diastella proteoides flowerhead
Back to Category Overview
Total images in all categories: 11,506
Total number of hits on all images: 6,503,068 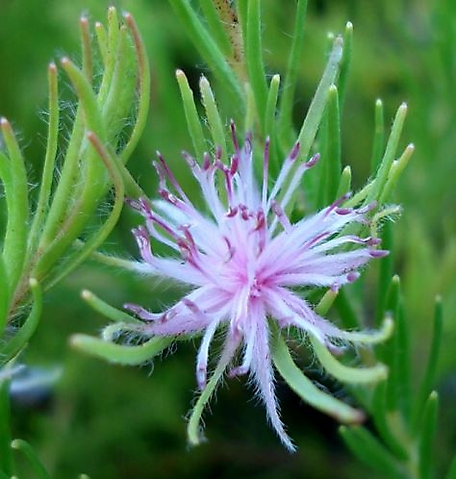 The flowerhead of Diastella proteoides grows at a stem-tip, only 1 cm in diameter. It consists of a dense cluster of small, separate florets surrounded by whitish hairy bracts.

Pink colouring is present near the perianth bases, while white prevails in most floral parts. Perianth tips and pollen presenters are purple in picture. The conspicuous hairiness on the spreading bracts, the erect perianths and also the leaves is long and sparse.

Flowering happens mainly from midwinter to summer but could also occur during the rest of the year.

The generic name, Diastella, is derived from the Greek word diastellein meaning to separate. This may refer to the flower segments being joined at the base only or their separating to release the styles, although both features are shared widely in the Proteaceae family (Manning, 2007; Bond and Goldblatt, 1984; http://pza.sanbi.org).