Home » TYPES » Shrubs » Cullumia aculeata
Back to Category Overview
Total images in all categories: 11,792
Total number of hits on all images: 6,941,539 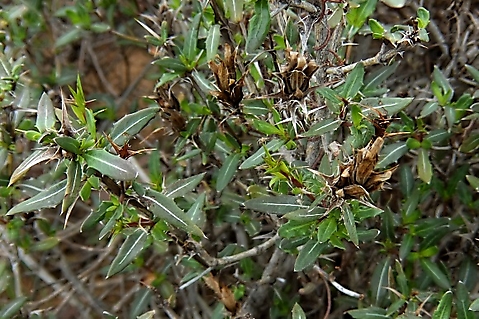 Cullumia aculeata, sometimes commonly called smallflower snakethistle, is a sprawling, single-stemmed shrublet or shrub. It sometimes reaches 1 m in height but usually only about 15 cm while sometimes more than 1 m in width.

The species distribution is in the southeast of the Western Cape from Swellendam to east of Oudtshoorn and near George, mainly on the Langeberg and Outeniqua Mountains. The photo was taken near the Kammanassie Dam.

The habitat is rocky mountain slopes of fynbos and renosterveld in sandy soils. There are two subspecies, neither of which is considered to be threatened in its habitat early in the twenty first century (Vlok and Schutte-Vlok, 2015; Moriarty, 1997; Bond and Goldblatt, 1984; iNaturalist; www.worldfloraonline.org; http://redlist.sanbi.org).