Home » TYPES » Shrubs » Cryptolepis oblongifolia
Back to Category Overview
Total images in all categories: 11,506
Total number of hits on all images: 6,483,539 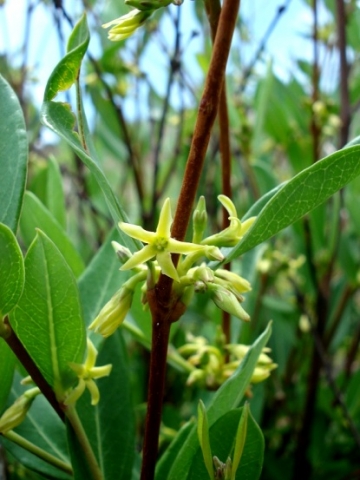 The specific name of Cryptolepis oblongifolia suggests oblong leaves. One may also say elliptic ones with pointed tips and tapering into short, pale petioles. No stipules can be seen in the photo. The leaf midrib is prominent, some lateral and secondary veining show creamy translucence, similar to that found in Euclea leaves. The leaves are positioned opposite in well-spaced pairs.

The distribution of C. oblongifolia in the north-east of South Africa extends from KwaZulu-Natal to North West across Mpumalanga, Limpopo and Gauteng. It is also well represented in most neighbouring countries to the north as well as in Swaziland.

The plant is particularly common in the Magaliesberg among grass and rock. It is not threatened in its presence in nature early in the twenty first century (Van Wyk and Malan, 1997; www.redlist.sanbi.org).

(There is another photo of the plant in the Magaliesberg Album under Regions.)