Home » TYPES » Shrubs » Coleonema pulchellum
Back to Category Overview
Total images in all categories: 11,792
Total number of hits on all images: 6,941,559 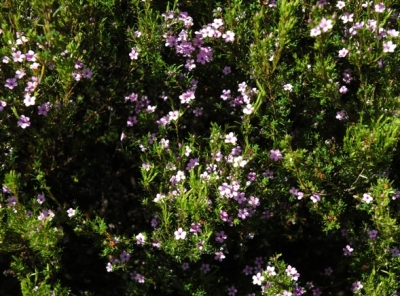 Coleonema pulchellum, commonly known as the confetti bush, is an erect, aromatic shrub of 80 cm to 1,5 m in height. The rounded plant-shape is much-branched, the stems woody low down while numerous branchlets higher up are soft.

The pale green leaves are tiny. In flower the plant is covered in a profusion of small, pink or sometimes white, star-shaped flowers. Flowering happens mainly from before midwinter to early summer.

The species distribution is along the Western Cape and Eastern Cape coast from around Knysna to Port Elizabeth. The habitat is coastal flats in scrub and fynbos. The species is not considered to be threatened in its habitat early in the twenty first century.

The plant is popular with gardeners. It grows from seed or cuttings in well-drained soil and sunny positions (Moriarty, 1997; Bond and Goldblatt, 1984; http://redlist.sanbi.org).