Home » TYPES » Shrubs » Clutia ericoides
Back to Category Overview
Total images in all categories: 11,661
Total number of hits on all images: 6,774,597 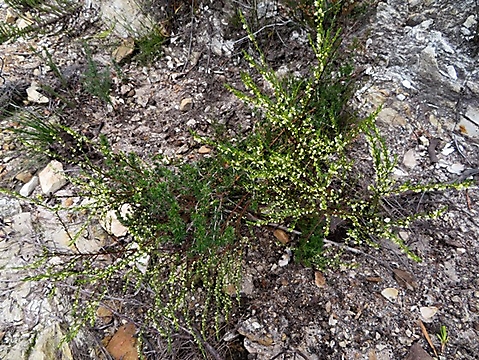 Clutia ericoides is a wiry, erect and spreading shrublet reaching heights from 30 cm to 60 cm.

Although belonging to the Euphorbiaceae family, the Clutia bushes do not exude a milky latex and some are browsed.

Several of the clutias are called bliksembosse (lightning bushes) in Afrikaans, an association with lightning existing in folklore. This has more to do with stinging hair caterpillars living in C. pulchella. The sting feels like an electric shock and the plants rather than their occupants became associated with lightning.

The species distribution is in the Western and Eastern Cape from Vanrhynsdorp to Gqeberha. The plant in picture was seen in the Langkloof, flowering in May.

The habitat of this plant is variable fynbos, renosterveld and grassy places. Three varieties of the species are on record, none of them threatened in their habitats early in the twenty first century (Vlok and Schutte-Vlok 2015; Coates Palgrave, 2002; Bond and Goldblatt, 1984; iNaturalist; http://redlist.sanbi.org)