Home » TYPES » Shrubs » Clutia ericoides leaves and floral beginnings
Back to Category Overview
Total images in all categories: 11,662
Total number of hits on all images: 6,774,798 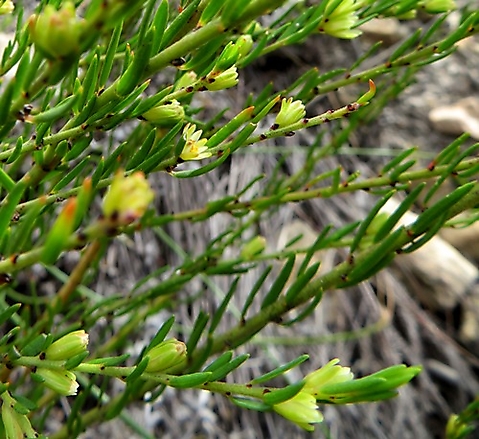 One picture of a plant may present identification difficulties when the plant is observed in very different conditions or growth stages. The Clutia ericoides bush seen here in the Langkloof among high rainfall, montane fynbos presents a green aspect of leaves and sepals with scant contribution from the white of petals yet.

A few days later and maybe a different camera angle will show the welcoming open flowers where white will predominate.

The flowers are borne also fairly low on the branches. There is little branching higher up in the bush, presenting few obstacles for the flowers to be damaged and still enough for being reached by pollinators (Vlok and Schutte-Vlok 2015; Bond and Goldblatt, 1984; iNaturalist).