Home » TYPES » Shrubs » Cliffortia ruscifolia var. ruscifolia
Back to Category Overview
Total images in all categories: 10,855
Total number of hits on all images: 5,507,997 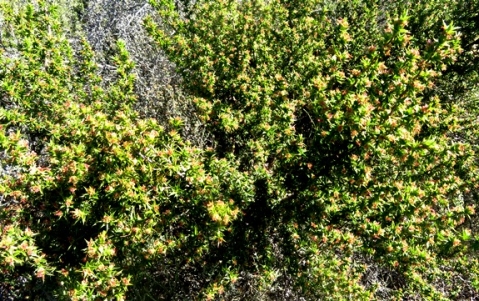 Cliffortia ruscifolia var. ruscifolia is a prickly shrub reaching heights of 1 m to 1,5 m and resprouting after fire. Its branches are densely covered in short hairs, especially the younger ones.

The plant grows from a deep taproot that anchors it well, notably on steep slopes common in its natural habitat. Two well-known common names of C. ruscifolia var. ruscifolia tell its story relating to mountain slopes: The climber’s friend name says hold on, I shall steady you and prevent a fall. The Afrikaans name steekbos (stab, sting, poke or pierce bush) tells a different story of stiff, spine-tipped leaves that inflict instant penalties, painful to the climber saved from his fall. Irony may accompany distress but its lessons tend to be heeded.

The specific name, ruscifolia is derived from the two Latin words ruscum meaning butcher’s broom (the common name of plants of the Ruscus genus bearing leaves with spiny tips) and folium meaning a leaf.

The species is found in the Western Cape and slightly further afield, from the Cape Peninsula to the Namaqua Klipkoppe in the Northern Cape and to the Kouga Mountains and Humansdorp in the Eastern Cape.

The variable habitat encountered here includes fynbos, arid and dense scrub as well as renosterveld. The plants grow in rocky and sandy soils on slopes and flats. The species is not considered to be threatened in its habitat early in the twenty first century (Vlok and Schutte-Vlok, 2010; Manning, 2007; Le Roux, et al, 2005; Bean and Johns, 2005; Andrew, 2017; iNaturalist; www.phillipskop.co.za; http://redlist.sanbi.org).