Home » TYPES » Shrubs » Cliffortia falcata
Back to Category Overview
Total images in all categories: 9,742
Total number of hits on all images: 4,371,517 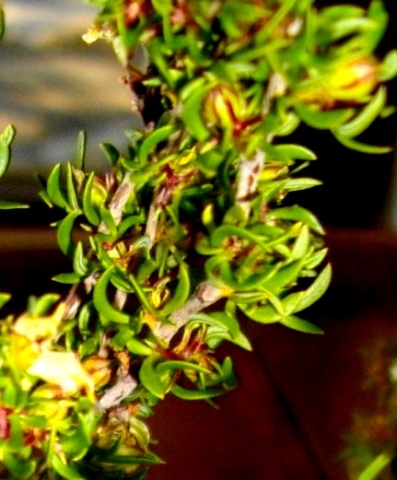 Cliffortia falcata is a compact, branched shrub growing erect stems to about 1 m in height.

Its narrow, trifoliolate leaves growing on short side-branches have sickle-shaped leaflets as reflected in the specific name falcata. The Latin word falx means sickle and the suffix -atus indicates likeness. The leaflets are acutely pointed with entire margins rolled under and smooth green surfaces. Leaflets become from 6 mm to 12 mm long.

The tiny flowers are single-sexed and may occur on the same plant or on separate plants. Flowering happens from mid-autumn to midwinter.

The species is distributed coastally from the Cape Peninsula to around Knysna. The habitat is sandy flats including the Agulhas Plain and slopes of the Langeberg, mostly in fynbos. The species is not considered to be threatened in its habitat early in the twenty first century (Privett and Lutzeyer, 2010; Bond and Goldblatt, 1984; Andrew, 2017; www.redlist.sanbi.org).