Home » TYPES » Shrubs » Rotheca hirsuta
Back to Category Overview
Total images in all categories: 11,538
Total number of hits on all images: 6,618,675 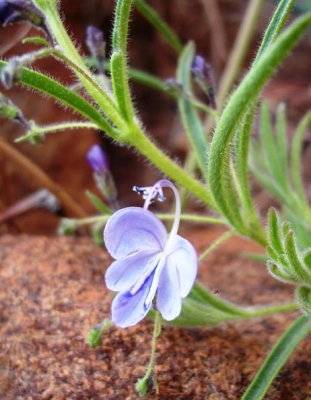 The lanceolate leaves usually grow in whorls of three, sometimes opposite. They are sessile with variably fleshy blades and entire, hairy margins.

The bright blue, two-lipped flowers grow solitary, in pairs or in small axillary clusters. The flowers are sometimes violet and may have small white markings. Flowering happens in spring and early summer.

The species distribution is widespread in the east and north of South Africa from the Eastern Cape, the Free State and North West to the Limpopo Lowveld and beyond the border.

The habitat is grassland and woodland. The species is not considered to be threatened in its habitat early in the twenty first century (Manning, 2009; Pooley, 1998; Van Wyk and Malan, 1997; http://redlist.sanbi.org).