Home » GENERA C » Chrysocoma » Chrysocoma
Back to Category Overview
Total images in all categories: 11,769
Total number of hits on all images: 6,918,705 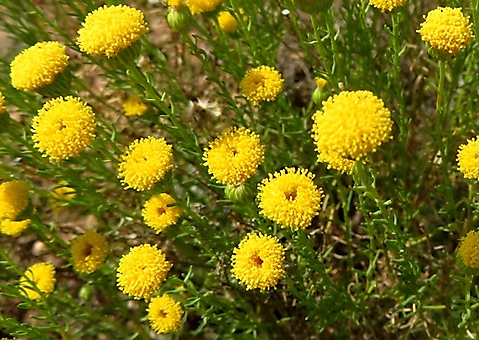 Chrysocoma, commonly known as bitterbush, is a genus of shrublets in the Asteraceae or daisy family.

Most species grow only disc florets, rarely ray florets in their flowerheads that are usually solitary on erect, stem-tip peduncles. The involucre is rounded to bell-shaped, formed by four rows of green bracts with membranous margins. The receptacle below is flat or rounded, sometimes honeycombed but without scales.

Where ray florets are present, they are yellow or blue and female. The many, yellow disc florets are bisexual, each tube ending in five lobes. There are triangular appendages on the anthers, the styles are two-branched.

The fruit is flattened and elliptic with a thickened margin. A pappus is usually present, consisting of two rows of scales, sometimes with bristles.

All twenty species of Chrysocoma occur in southern Africa. Some of the plants feature in traditional medicine. The plants are usually palatable to game and stock, but may cause diarrhoea in sheep and kaalsiekte (alopecia) in lambs when their dams over-ingest bitterbush.