Home » GENERA C » Chrysocoma » Chrysocoma coma-aurea
Back to Category Overview
Total images in all categories: 11,656
Total number of hits on all images: 6,771,159 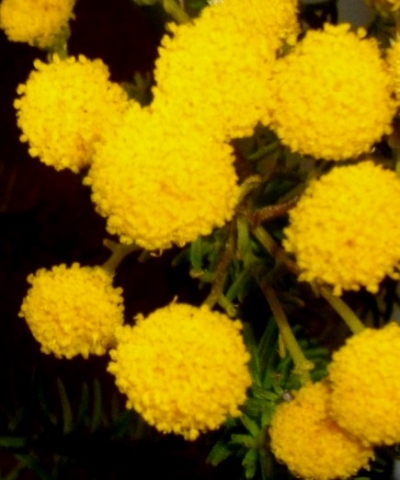 Previous
Image 9 of 14
Next

Observed closely, the florets comprising Chrysocoma coma-aurea flowerheads are so small and close together, they appear granular in the yellow disc. A multitude of seeds may eventually depart from one such head.

The absence of ray florets in this species enhances the appearance of the button-like discs, produced in profusion on erect stalks above the foliage. The discoid or button-like flowerheads grow on erect stalks that emerge from stem tips. Tiny stem leaves are present, alternating up the stems to near the involucres.

The lack of ray florets does not preclude Chrysocoma from membership of the Asteraceae or daisy family; they are merely a special kind of daisy. The fynbos and other parts of South Africa have many Asteraceae plants growing discoid flowerheads lacking rings of surrounding rays.

Common names of this plant include shrub goldilocks, cowcud and bitterbush. There is sometimes reference to two varieties of C. coma-aurea, viz. var. patula and var. cernua, but these don’t seem to enjoy formal status.

The scientific name is derived from the Greek word chrysos meaning gold and the Latin words coma meaning the hair of the head and aurum meaning gold respectively. The golden aspect of the plant is thus emphasised by nominal reference in two languages!

Introduced into Australia long ago, by accident or by somebody ignorant, careless or reckless, the species is now invasive in Western Australia. Even gold may become unloved when appearing in the wrong place; a discovery vital to the education of King Midas in ancient lore (Manning, 2007; Privett and Lutzeyer, 2010; Andrew, 2017; iNaturalist; http://redlist.sanbi.org).