Home » TYPES » Shrubs » Calobota sericea
Back to Category Overview
Total images in all categories: 8,883
Total number of hits on all images: 3,863,579 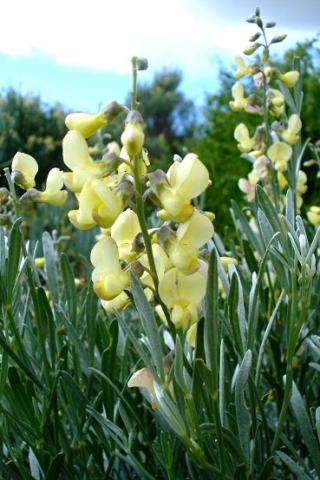 Calobota sericea is a shrub that grows to 1,5 m in height and also spreads.

Creamy yellow flowers as in the photo, or brighter yellow ones, consistent with the flower shape typical of the Fabaceae family, grow in dense racemes above the foliage. Flowering happens from midwinter to early spring.

The plant is found in the northern parts of the Western Cape and in Namaqualand in the Northern Cape where it has a stable population early in the twenty first century. Its habitat is sandy flats and lower, stony slopes in semi-arid conditions with low winter rainfall and hot, dry summers. This one was found flowering in August near Kamieskroon.

This plant used to be called Lebeckia sericea. With the reinstatement of the Calobota genus sixteen species with hairy, pinnate leaves were separated from the Lebeckia genus that is left with plants that have hairless, simple leaves (Manning, 2009; Vlok and Schutte-Vlok, 2010; Bond and Goldblatt, 1984; iSpot; http://redlist.sanbi.org).