Home » TYPES » Shrubs » Blepharis furcata
Back to Category Overview
Total images in all categories: 10,683
Total number of hits on all images: 5,344,447 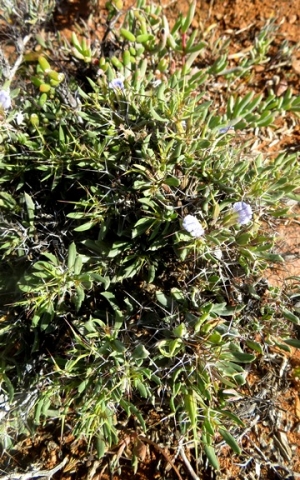 Blepharis furcata is a spreading shrublet with sparsely haired branches. The woody stems with short internodes become up to 15 cm long.

The species occurs in the Northern Cape from the Gariep River to the Great Karoo and Namibia. The photo was taken in Namaqualand.

The habitat is stony flats and slopes, the plants growing in the open in arid conditions. The species is not considered to be threatened in its habitat early in the twenty first century (iNaturalist; JSTOR; http://redlist.sanbi.org).