Home » TYPES » Shrubs » Blepharis capensis in flower
Back to Category Overview
Total images in all categories: 12,058
Total number of hits on all images: 7,353,523 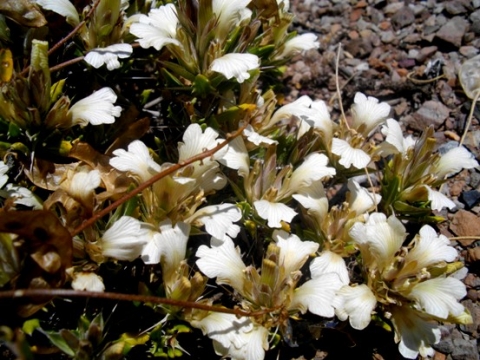 This Blepharis capensis shrub was found flowering in October next to the road east of Barrydale in the Little Karoo. The plant is sometimes called the skerpioenstert (scorpion’s tail).

Pale brown, spine-toothed bracts surround the one-lipped creamy white corolla. The calyx is hairy. Faint parallel veins fan out from the petal base along the corolla surface, approaching its three-lobed tip. The petal curves outwards slightly, presenting its upper part horizontally. The central corolla lobe is smaller, somewhat square and notched; the lateral ones rounded.

The flowers have four stiff stamens, two of them flattened above (Vlok and Schutte-Vlok, 2010; JSTOR).