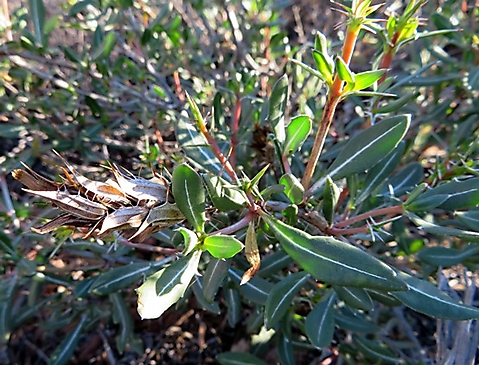 Blepharis is a genus of annual and perennial herbs as well as subshrubs within the Acanthaceae family. The trailing branches don’t root. The paired leaves are often unequal, sometimes spine-toothed.

The flowers grow in dense, stem-tip spikes with eight spine-toothed bracts. The generic name, Blepharis, is a Greek word meaning eyelash, referring to the hair fringes along the margins of the bracts and calyx lobes. The calyx consists of four unequal lobes.

The blue or white corolla has a short tube with a ring of hairs in the mouth and one lip with three to five apical lobes. There are four stamens with cylindrical filaments, the upper pair flattened and horned, the anthers exserted. Blepharis is a core eudicot genus, its pollen three-colpate or three-grooved. Eudicots are a later grouping of flowering plants than monocots or dicots, relating to newer knowledge of their evolutionary path.

There is a ring- or saucer-shaped disc in the flower base where the nectar is produced. The ovary is ellipsoid with one or two ovules per locule. The style is linear dividing into two short, broad branches. The fruit capsule is stalkless, the ovate seeds laterally compressed and hairy.

There are about 126 Blepharis species in Africa, around the Mediterranean and southeast Asia; about 50 of them in southern Africa, mostly in arid and semi-arid regions. The genus resembles Acanthopsis but Blepharis species are all spiny with stem-leaves.

Some species feature in traditional medicine relating to wound-healing and digestive issues. The plants are unpalatable to game and stock, proliferating in overgrazed veld.