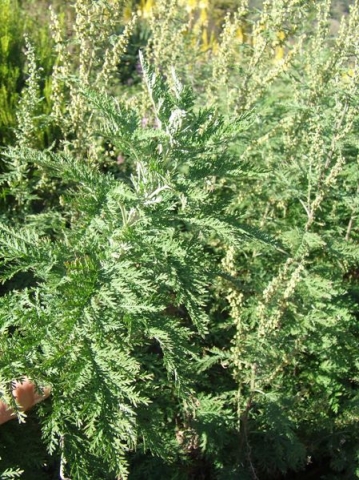 Artemisia afra is a perennial shrub known as wild wormwood and in Afrikaans as wilde-als. Small-flowered and strongly aromatic, it is often not recognised as a member of the Asteraceae family. The plant resembles a European medicinal species commonly known as wormwood.

A. afra is distributed widely in all provinces of South Africa, perhaps with the exception of the Northern Cape and northwards in Africa to Ethiopia. The species is not considered to be threatened in its habitat early in the twenty first century.

The plant makes a good garden (or herb garden) subject. It features in a variety of traditional medicine uses.

The about 400 Artemisia species are more commonly found in the northern hemisphere around the Mediterranean and further, while some grow in Siberia. A. afra is the only member of its genus indigenous in South Africa. A. vulgaris, a European annual, has been naturalised in the Eastern Cape (www.plantzafrica.com; http://redlist.sanbi.org).