Home » TYPES » Shrubs » Anthospermum spathulatum
Back to Category Overview
Total images in all categories: 11,656
Total number of hits on all images: 6,771,272 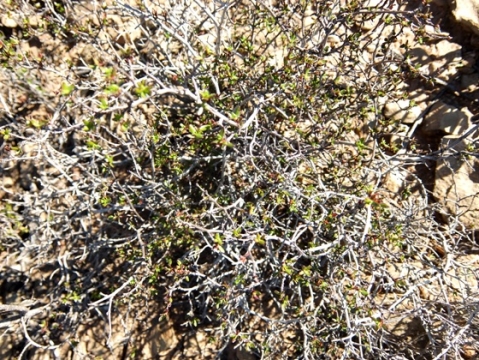 Anthospermum spathulatum, in Afrikaans commonly known as jakkalsstert (jackal tail), is a usually dioecious shrub that does not resprout after fire, sometimes growing to 1,5 m.

The shrub is often erect, but sometimes spreads to form a cushion as this specimen has done; its struggle evident in many dry branches at the end of a rainless summer. It was seen at the Minwater farm near Oudtshoorn where visitors are introduced to veld plants and ecological features.

The generic name composed of the Greek words anthos (flower) and spermum (seed) indicates that male flowers of the genus may carry a small ovary capable of producing a seed.

The distribution is wide, from Namaqualand and the Western Cape to the Eastern Cape, some occurring in Namibia, Free State, KZN and Lesotho, mostly in semi-arid flats or lower slopes of sandy or loam soils. The species has five recognised subspecies, none of which is considered to be threatened in its habitat early in the twenty first century (Vlok and Schutte-Vlok, 2010; iSpot; Bond and Goldblatt, 1984; Andrew, 2012; http://redlist.sanbi.org).