Home » TYPES » Shrubs » Anisodontea scabrosa flower
Back to Category Overview
Total images in all categories: 12,082
Total number of hits on all images: 7,379,598 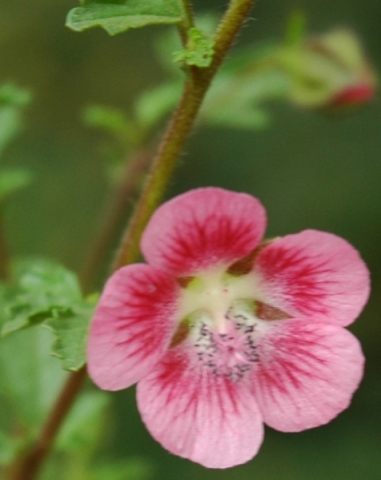 Anisodontea scabrosa, the pink mallow or pienk-kiesieblaar and sandroos in Afrikaans, is an evergreen shrub that grows taller than 2 m in an upright growth form.

The leaves are aromatic, variable in shape, sometimes elliptic or three-lobed, with hairy and sticky surfaces and prominent veining.

Blooms appear in spring or early summer in varying shades of pink. Flower structure is similar to that of hibiscus.

This plant grows in low altitude coastal areas on sandy flats or granite outcrops of the Western Cape, Northern Cape, Eastern Cape and KwaZulu-Natal. It is not considered to be threatened in its habitat early in the twenty first century (www.plantzafrica.com; www.redlist.sanbi.org.za).