Home » GENERA A » Anginon » Anginon difforme regrowth
Back to Category Overview
Total images in all categories: 12,068
Total number of hits on all images: 7,360,649 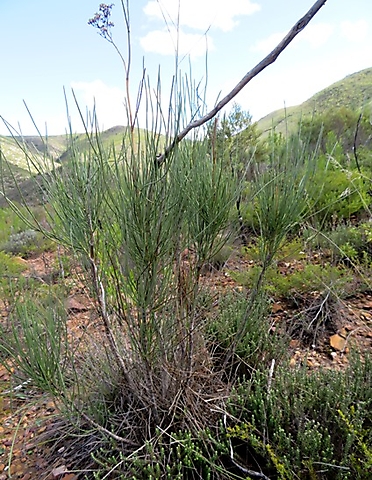 Branched from the base, this Anginon difforme shrub is flourishing anew after earlier days when it exhibited at least one much taller stem.

The little-branched, rod-like stems are rarely many and soon erect after curving out, giving each other space for some leaf spreading at their tips. The unusual length that some of the leaves may attain is shown here; sometimes up to 32 cm.

The species develops an underground, woody swelling of the stem base or root crown, a lignotuber from which it resprouts, particularly after fire (Curtis-Scott, et al, 2020; Vlok and Schutte-Vlok, 2015; Manning, 2007; Coates Palgrave, 2002; iNaturalist).