Home » TYPES » Shrubs » Anaxeton asperum subsp. asperum
Back to Category Overview
Total images in all categories: 11,528
Total number of hits on all images: 6,610,476 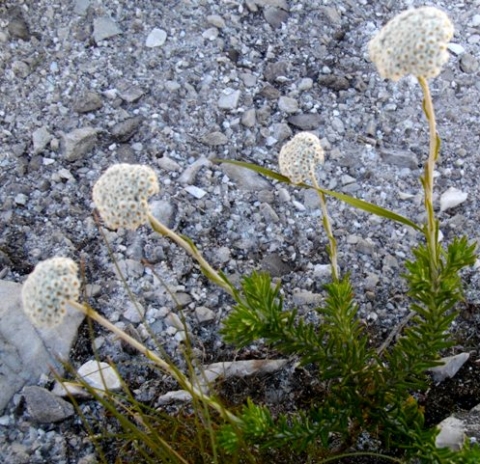 The leaf shape is narrowly oblong or linear, ending in sharp, almost prickly tips. The leaf colour is dark green and shiny on top, white-woolly below. The leaves are from 5 mm to 35 mm long.

Endemic to the Western Cape, the species is distributed from the Cape Peninsula to Stellenbosch, Caledon and Bredasdorp. This plant was seen in Fernkloof at Hermanus in October.

The habitat is fynbos in sandy soil on stony sandstone slopes from sea level to 1200 m. The subspecies is not considered to be threatened in its habitat early in the twenty first century.

There is a second subspecies, viz. subsp. pauciflorum. There are ten species in the Anaxeton genus, all occurring in fynbos of the Western Cape (Bean and Johns, 2005; Bond and Goldblatt, 1984; iSpot; www.redlist.sanbi.org).