Home » TYPES » Shrubs » Amellus asteroides invaded!
Back to Category Overview
Total images in all categories: 12,086
Total number of hits on all images: 7,381,169 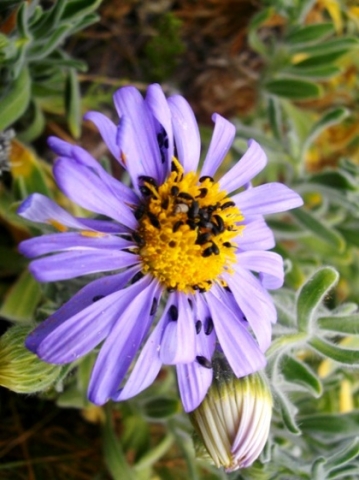 Invasion of privacy is unwelcome; military invasion extremely so. Nectar consuming invaders in the floral domain are, however, a totally different matter.

As long as such intruders serve to transport pollen to their next landings on flowers of the same species, they add value; analogous to the idea of the Greek philosopher, Heraclitus, who considered war a period of development between two periods of stagnation.

Should invaders eat the whole flower, the act would, of course, be unwelcome aggression as no seed would be produced. Loss incurred from invasion is the kind of offence that would make people run to the United Nations for redress. Flowers are largely pacifists free from whining tendencies (Manning, 2007; iSpot).