Home » TYPES » Shrubs » Amellus asteroides and the Unknown Pollinator
Back to Category Overview
Total images in all categories: 11,018
Total number of hits on all images: 5,653,344

Amellus asteroides and the Unknown Pollinator 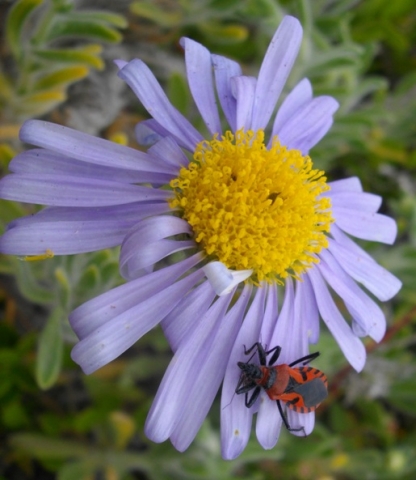 Amellus asteroides is visited in the photo by a red and black insect, either a firebug or an assassin bug. There are hundreds of described species of Pyrrhocoris and Reduviinae bugs. But this one may not be one of those.

There are probably more insect species not yet described, unknown to Science, than the described ones. So, more entomologists are needed!  More information does not make the world bigger, just more complex and harder to conquer; as the expanding universe is doing to size.

This pretty insect, maybe never to be seen again, adds good colour and form under any name, or no name for that matter. Like Eleanor Rigby and Father McKenzie... what does it care?

The Unknown Pollinator, deserving to be honoured, represents its class on this flower with dignity (Holm, 2008; iSpot).