Home » TYPES » Shrubs » Amellus asteroides flowerhead with honey-coloured disc
Back to Category Overview
Total images in all categories: 11,528
Total number of hits on all images: 6,610,363 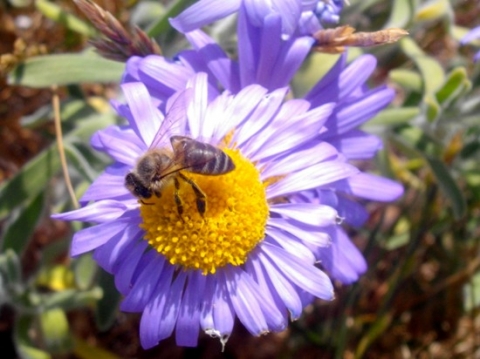 The flowerheads of Amellus asteroides grow solitary and erect on hairy stalks with small leaves widely spaced along them. The flowerhead has blue-mauve radial florets, less commonly white ones. There is an unconfirmed possibility that the plant sometimes produces only the tiny, yellow, five-lobed disc flowers and no rays.

The pappus on the seed consists of fringed scales and some bristles (Manning, 2007; iSpot).