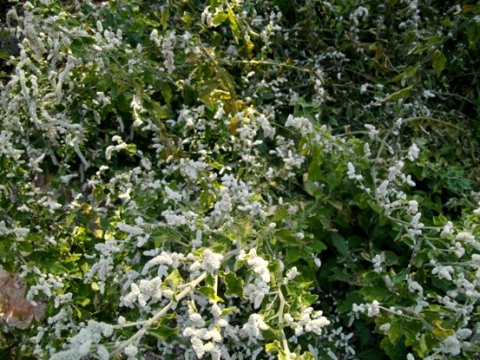 Aerva leucura is a spreading, much branched shrub that reaches 1 m in height. The hairy leaves are alternate on short stalks without stipules. They are spaced fairly widely along the hairy young stems. The leaf shape is obovate, tapering to a tip that is pointed or nearly so. The plant being semi-deciduous, the leaves tend to turn yellow or red in autumn. The margins of the dull-green leaves are wavy, the whitish midrib conspicuous.

The distribution of the species is widespread in the eastern and northern parts of South Africa, all provinces barring the Western Cape, coinciding with the area receiving summer rain. It also grows in Namibia and Botswana.

The habitat is grassland and scrub, the plant thriving in well-drained, loamy soil. The species is not considered to be threatened in its habitat early in the twenty first century.

An Afrikaans common name of aambeibossie (little haemorrhoids bush) was derived from the plant’s use in treatment of the condition; the same name conferred for the same reason to Chironia baccifera (Van Wyk and Malan, 1997; www.plantzafrica.com; http://redlist.sanbi.org).