Home » TYPES » Shrubs » Acanthopsis villosa
Back to Category Overview
Total images in all categories: 11,442
Total number of hits on all images: 6,209,838 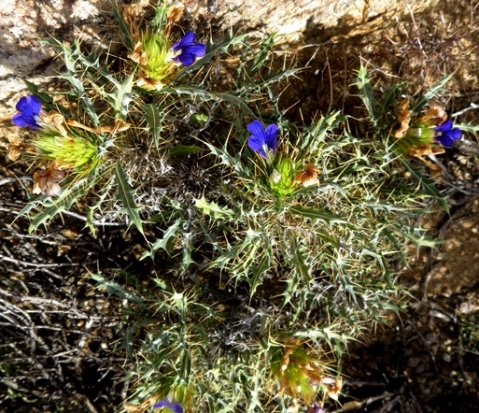 Acanthopsis villosa is a low-growing, densely leafy and spiny shrublet. The decumbent branches hold their upper parts erect, the inflorescence prominently displayed for the benefit of pollinators.

The generic name, Acanthopsis, indicates that the plants resemble those of the Acanthus genus; both genera belong to the Acanthaceae family.

A. villosa is endemic to the Northern Cape, found in Namaqualand and Bushmanland from Steinkopf to Calvinia.

The habitat is arid, sparsely vegetated land receiving modest amounts of winter rain and prone to extreme temperatures. The plants grow in well-drained, sandy soils derived from granite or quartzite, often seen on rocky outcrops. Although the species is range-restricted, it is not considered to be threatened in its habitat early in the twenty first century (Leistner, (Ed.), 2000; iNaturalist; http://redlist.sanbi.org).