Home » TYPES » Shrubs » Acanthopsis villosa flower
Back to Category Overview
Total images in all categories: 11,528
Total number of hits on all images: 6,610,554 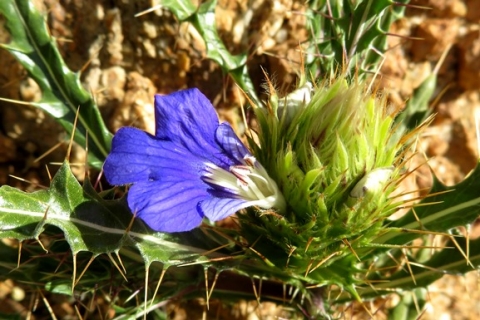 The one-lipped and five-lobed blue flowers of Acanthopsis villosa face inwards to the central axis of the inflorescence, the spike.

The corolla tube is shorter than its lobes, the central three lobes large and rounded, the outermost pair on the flanks small and pointed. The middle lobe is notched at its tip and white at its base.

The fruit of A. villosa is a compressed, ovoid capsule. The elliptic seeds appear feathery from long, hygroscopic hairs that cover them. Such hairs absorb moisture from the air; a handy attribute where rain is infrequent (Leistner, (Ed.), 2000; iNaturalist).