Home » TYPES » Shrubs » Acanthopsis villosa bright blue
Back to Category Overview
Total images in all categories: 10,349
Total number of hits on all images: 5,048,971 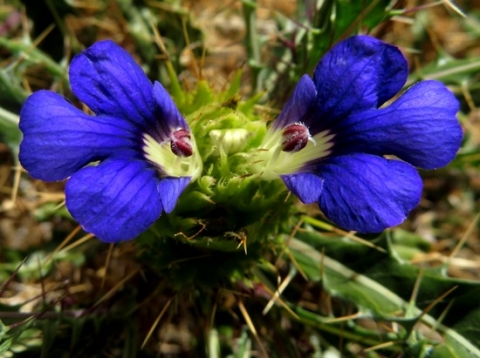 The inflorescence of Acanthopsis villosa is a short spike borne at a stem-tip.

The bright blue corolla has one lip and a short white tube below. Veins are visible on the corolla lobes, running from base to tip, branching somewhat near the tip.

The four stamens have sturdy white filaments that arise in the mouth of the tube. Their anthers are oblong and brown to purple. They curve in and meet at their tips in the photo.

Some white hairiness is visible among them, maybe on the branch of the thread-like style.

A white folded corolla, a bud yet to open, is visible between the two flowers facing each other in the photo (Leistner, (Ed.), 2000; iNaturalist).