Home » TYPES » Shrubs » Abutilon grandiflorum
Back to Category Overview
Total images in all categories: 11,442
Total number of hits on all images: 6,209,777 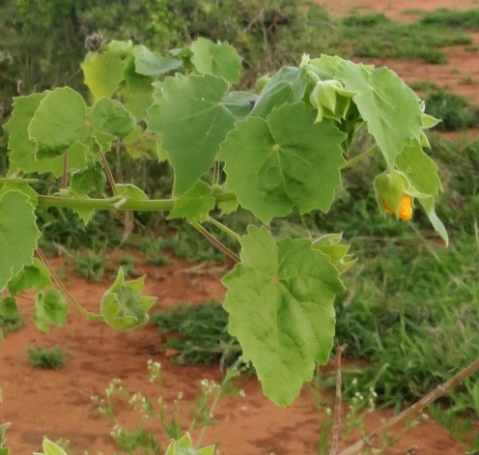 Abutilon grandiflorum is an herbaceous, soft-wooded shrub reaching heights up to 1,5 m. The cylindrical stems branch from the base, losing their initial hairiness and becoming woody later. Stems and leaf petioles may be purplish red or grey-green at different stages.

Abutilon plants are distinguished from related other Malvaceae species by the absence of a whorl of bracts below the flower calyx.

The A. grandiflorum distribution is in the northeast of South Africa in KwaZulu-Natal, Mpumalanga and Limpopo, also in southern Africa beyond the border and on Madagascar.

The habitat is subtropical and tropical summer rainfall regions at elevations below 1200 m. The plants grow in sandy or gravelly soils in dry area scrub, along river banks, pans and disturbed areas like roadsides. The species is not considered to be threatened in its habitat early in the twenty first century (Leistner, (Ed.), 2000; Letty, 1962; JSTOR; iSpot; www.zimbabweflora.co.zw; http://redlist.sanbi.org).