Home » TYPES » Shrubs » Abutilon austro-africanum
Back to Category Overview
Total images in all categories: 11,528
Total number of hits on all images: 6,610,502 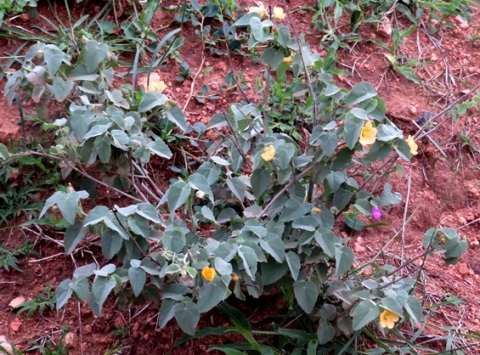 Abutilon austro-africanum is a spreading shrublet reaching heights between 50 cm and 75 cm. Young stems starting off grey-green may become purplish, losing their initial hairiness soon and later become woody. Old stems may be smooth or longitudinally fissured, ash-brown in colour.

The species distribution is wide across the northerly parts of South Africa from the Northern Cape, the provinces north of the Vaal River and KwaZulu-Natal. The plant distribution continues widespread across the border in southern Africa.

The habitat is karoid scrub and grassland in variable summer rainfall regions. The species is not considered to be threatened in its habitat early in the twenty first century (iSpot; JSTOR; www.kyffhauser.co.za; http://redlist.sanbi.org).