Home » REGIONS » Nature's Valley » Clean beach rock
Back to Category Overview
Total images in all categories: 12,078
Total number of hits on all images: 7,371,321 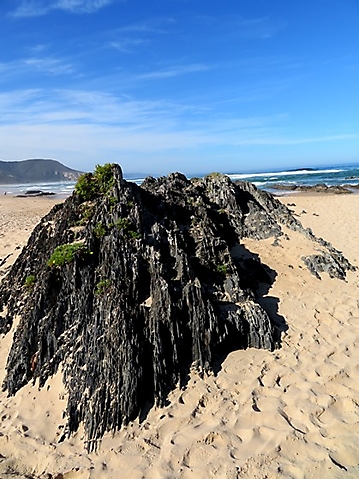 Beaches of the world are continually washed by the forces of wind and waves. The opposite also happens: Human litterbug habits prevent wind and waves from returning the beaches to us in pristine condition.

Not only waste left on the beach offends but also flotsam and jetsam that should never have been spilt into the sea, as well as items carried to sea by rivers and manmade drainage outlets pollute everywhere. And then there are the occasional oil spills that ruin beaches for long periods, killing marine life of all kinds in large numbers.

The more durable a waste item is the longer it offends. Plastic has become special in pollution on land and sea. The bigger the problem, the more talk it generates, mesmerising people to watch in awe and talk furiously at meeting big and small.

Every year the world uses enough plastic to circle the globe several times, about ten percent of all the waste people produce. Only about five percent of plastic used is currently recovered. Despite debating the ill effects increasingly, the frenzy of manufacturing plastic water bottles, toothbrushes and thousands of other items isn’t slowing yet.

The talk is, however, yielding some hope: there seem to be bacteria near the Amazon that break down polyurethane, one of the most common plastics. Another bacterium discovered in Japan may do the same to polyethylene terephthalate, another type of plastic.

Non-biodegradable plastic does break down until it is no longer visible by the naked eye. A single plastic bag can fall apart into millions of micro- and nano-plastic particles, increasing the number of such particles exponentially.

So, the deeds-to-talk ratio is to be improved in defence of nature, as land and sea are filling up with plastic (and other) debris generated by the human lifestyle (Wikipedia).