Home » PARKS AND GARDENS » Kruger National Park » Leopard resting but interested
Back to Category Overview
Total images in all categories: 12,086
Total number of hits on all images: 7,387,263 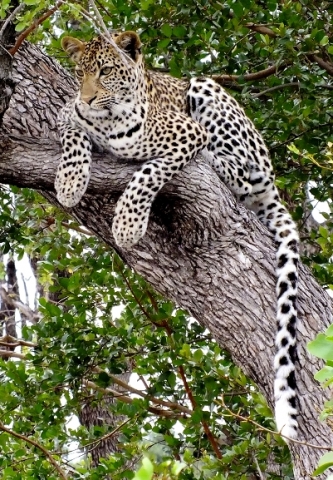 The spots on the forehead and next to the nose of a leopard are unique, like fingerprints. So, you can always recognise the culprit that bit you.

A leopard can’t change its spots is a statement often heard. It is, however, not meant about leopards but about out of favour people believed to be unable to mend their wicked ways.

In nature, leopard spots are useful in daytime camouflage as the animal prefers shade and is harder to see in dappled sunlight among bushes or in forests.

Black leopards are still found in India and Malaysia, rare in Africa. The black leopard has a condition called melanism, the opposite of albinism. So, the black panther is not a different species, merely blessed with (or suffering from?) an abundance of black pigment. Albino leopards are very rare.

Although predominantly terrestrial, leopards are competent and agile in trees, sometimes heaving large prey into a tree used on a short-term basis as a one item pantry. Leopards may catch either mouse or kudu. They have a wider spectrum of prey than lion.

There is a story of a gemsbok being caught by a leopard; one of a crocodile, not easy to believe; and yet another of a leopard stranded on an island in Kariba catching fish. Up to 23 animal species comprised the diet of some Cape leopards studied in the Cederberg. Leopards will occasionally catch python.

Contrary to popular belief, they do not primarily seek baboons as delicatessen or staple… baboon canine teeth being longer than those of leopards. This has brought some intellectual development mastered by only some leopards, given the state of the education system these days.

Please be careful! No need to become species number 24 in the recorded leopard diet (Riëtte, 2016).