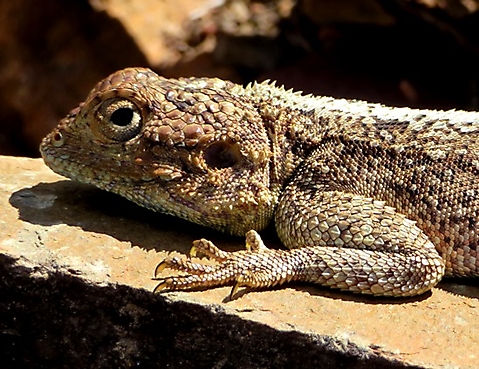 Why do the scaly agamas first watch you without the slightest movement? They’re predicting your next move for instant action should you spell danger. Fight or flight is the simplified version of options on their list. What about waiting for something more, a sign of outreach and communication? Yes, but it doesn’t have the brain for that.

Among people avoiding the scaly ones is standard practice. But those avoided don’t have scales. They are merely believed to have them, accused of having them, you won’t believe me, he is literally covered in them! Our notions so often shape reality deficient in fact. Focussed observation with a will to comprehend is a good habit.

This guy has scales, lots of them and they’re rather pretty. Neatly arranged in subtly overlapping patterns, they change in size, shape and colour for covering surfaces on different body parts, presenting a range of elegant finishes.

Look at it long enough and interspecies jealousy will prompt fabrics for human clothing with special attention to texture and nuances of earthy tint. All for arousing intraspecies jealousy at the next party.

But could there be more to meet the eye in that impenetrable dark eye? A paralinguistic conversation outreach between species, closing the gap of millions of years of divergent evolution, in a sort of "I actually know you!" sense that resonates in the other?

There is familiarity in the arm and hand, the fashionable nails. The cranial bulge suggests capacity of a sort, the wide mouth holds social promise, and then there are nose and ear like we all have: Could this guy be a conversation partner at some level? Is there another Rosetta Stone, one between people and other animals, containing meaningful message waiting to be deciphered?

Some children have instinctive tendencies of capturing and carrying agamas and other animals home, suggesting exactly this idea of befriending them. It hasn't worked too well yet and experience says no. Its needs are too different and in any case the law says the same, for good reason. It is said that people haven't tamed anything successfully since the horse 4000 years ago.

Sanity prevails but the possibility lingers. We make zoos and nature reserves to preserve them, where they can thrive in a contrived “natural state”, while we continue “improving” nature wherever the whim takes us, being the boss of everything, of course. Then we leave them alone wherever we can safely keep them, as we are at a loss for what to do next.

If it had crawled out of a spaceship, the earth’s brains trust would have been all out working on communication possibilities, treaties and control. But it crawls from under a rock, so the effort isn’t there. The discovery awaits at a future time.