Home » REGIONS » Kouga » Aspalathus kougaensis lower parts
Back to Category Overview
Total images in all categories: 11,506
Total number of hits on all images: 6,515,799 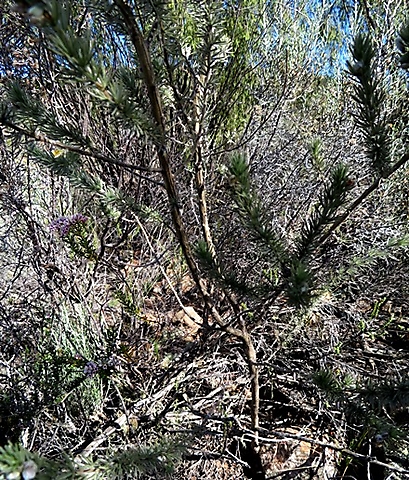 Previous
Image 7 of 30
Next

By some accounts Aspalathus kougaensis may, in especially favourable conditions, become up to 4 m tall. This brings it into the tree range. But it sometimes also becomes only 20 cm in height.

As the habitat is fynbos and renosterveld, such tall bushes should be expected in old veld that hasn’t burned for many years. Probably also in especially apposite spots, such as deep, ravine soil where water is often plentiful.

Plant variability probably brought the plant its sometimes-heard but for some apt common name of misunderstood Capegorse.

Confusion involving Aspalathus species is certainly not confined to this one. Most of the about 278 species are found in the fynbos, most Aspalathus flowers are yellow and peaflower-like. What is more is that many of the kinds display intraspecies variability on various plant parts, testing observer knowledge (Bond and Goldblatt, 1984; JSTOR; iNaturalist).