Home » PARKS AND GARDENS » De Hoop Dam » Zantedeschia pentlandii
Back to Category Overview
Total images in all categories: 12,061
Total number of hits on all images: 7,359,587 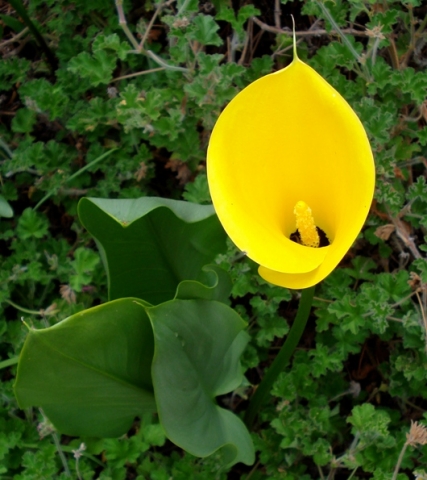 Zanthedeschia pentlandii is named after the House of Pentland in Scotland where it was first cultivated. In the early days of European interest in the Cape, the Cape Colony merely served as an unrewarded direct exporter of indigenous plants. Europe was fascinated with these unheard of species. They studied them, classified them and grew them as the fancies took those few with access to the botanical treasure.

This plant was one of the valued ones. It has large heart-shaped, prominently veined leaves. The flower consists of the funnel-shaped spathe within which the columnar spadix is found.

The spathe of Z. pentlandii is yellow with a conspicuous purple mark inside the base. The spadix reaches only as far as nearly halfway up the length of the spathe. The spadix column is covered with the actual flowers, many tiny ones all along the surface of the spadix. The top end is made up of male flowers; the female ones are clustered nearer the base (Germishuizen, 1982; www.plantzafrica.com).