Home » PARKS AND GARDENS » De Hoop Dam » Senegalia galpinii
Back to Category Overview
Total images in all categories: 12,061
Total number of hits on all images: 7,359,607 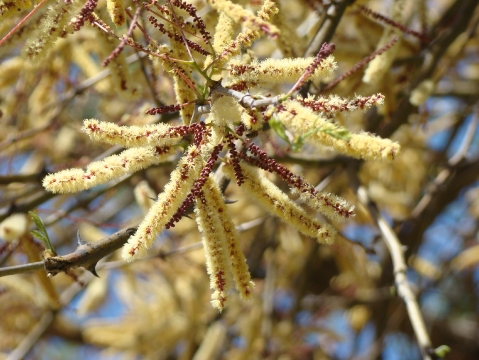 The monkey-thorn is deciduous in its southern African savannah habitat.

The maroon buds and cream open flowers of Senegalia galpinii do not appear as if they have much to do with each other when displayed in adjacent or the same catkin. The globular buds closely stacked along the long, thin spike are maroon or purple, as are the petals of the tiny florets, quite unlike the generally pale yellow Senegalia flower appearance in South Africa.

Once the flowers are all open, spreading brushes of creamy yellow to yellow stamens cover the spike and numerous spikes the leafless tree.

Bloomtime of the monkey thorn in a peak year is over-the-top exuberance. This is so for the tree, its neighbours, pollinators of all conceivable orientations and endowments, as well as for spirits inspiring all kinds of breathing bodies, even those suspected of lurking in the transient vapours of spring.

S. galpinii is grown from seed soaked in hot water. The tree takes to cultivation well and grows fast. It is moderately frost resistant (Coates Palgrave, 2002).