Home » REGIONS » Biedouw Valley » Searsia undulata being eaten
Back to Category Overview
Total images in all categories: 11,549
Total number of hits on all images: 6,634,860 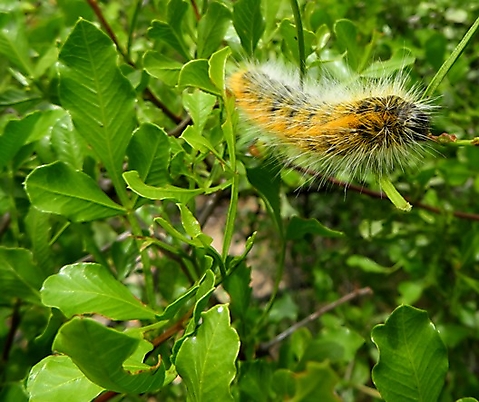 If caterpillars don’t have leaves to eat, many flowers will later remain unpollinated, therefore fruitless, seedless and without offspring.

Life for all species is about doing one’s thing. One’s thing in nature is about creating one more generation of one’s own kind. This, unfortunately, comes at a price, involving a contribution to others, one’s users, doing their things in turn. People have lots to say about this, the only species that thought their way to the freedom of (also) making other plans.

For the rest, life involves paying one’s dues and making one’s sacrifices, like being eaten, in the multispecies ecology within which all form part. In return, of course, the prize of species survival is earned, albeit not without an almost eternal struggle. Almost, for species are mortal too, just lasting longer than individual specimen.

If species were suddenly to decide for themselves not to participate in nature’s version of the rat race, they could avoid the neighbours and die of hunger promptly, or avoid procreation and disappear in one generation.

Nature out there is also the nature inside: Because the individual or specimen of every living thing in the world is finite and must die, it (or some of its kind) must reproduce before dying for the species to continue. Thus, procreation is the singular commitment of every mature specimen of every kind of living thing there is.

A percentage of these has to succeed to keep the species extant. Their next problem is staying alive. This involves eating other living things, entities usually unlike themselves but burdened with the same, singular, procreative mission.

The feeding issue increases the scale requirements of reproduction for (almost) all species: Make enough babies, as some will become choice morsels “on the table” of something hungry out there. In other words, reproduce fast enough for feeding the unavoidable others, as well as sustaining and hopefully growing own species numbers. While doing all of this, for many to continue loving and caring for their children.

It’s all about continuity of fitting into the ecology of a multispecies animal and plant community in each particular, often very diverse environment on earth. The more of this delectable diversity, the more that may "eye" each other as food (or utensil). All contribute to and benefit from their heterogeneous society; consuming and enduring each other.

This hairy consumer of Namaqua kuni bush leaves will most likely metamorphose from its larva state into something that flies and visits flowers of the neighbourhood before next year this time.

Which flowers? Depending on the species of the caterpillar, it may be picky and associate itself with only one flower species. When the flower opens, the transformed insect in more mobile state will be into nectar and pollen, no longer leaves.

The beastie may, however, be a generalist, a gourmand of many tastes and a consumer of diverse nectar and pollen dishes on offer within its mobility range. Searsia may feature among the insect's proclivities, i.e. this particular insect in transformed guise may one day pollinate flowers of this very bush; or not.

In the bigger scheme of nature’s neighbourhood arrangements, non-reciprocation is just one of those things all accept: Payback for largesse received may be to different resident types than those one benefited from way back.

The heterogeneous range of neighbourhood residents is kept going by their inherent diversity. There is often an ebb and flow in species fortunes linked to climate, as well as shifts in the balance of arrangements regarding feeding each other. An ecological system may survive most of its specific members. Time changes the local mix of survivors, as unsuccessful competitors become extinct, while new ones evolve from those currently extant.

Some evolutionary discards are not totally out of the picture. Their branches of the family tree may still be sprouting new species long after their time. This means that mutated and otherwise evolved offspring may continue in new forms, although sometimes hard to recognise the connection between current descendants and their distant, ancestral precursors.

There are missing links and historical gap intervals all over the place in the lineage of the living, also as far as us humans are concerned.