Home » GENERA P » Protea » Protea repens, producer of honey syrup
Back to Category Overview
Total images in all categories: 11,241
Total number of hits on all images: 5,956,181 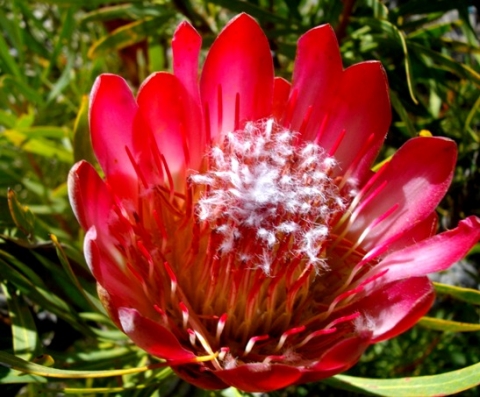 Linnaeus named Protea repens in the middle of the eighteenth century from the appearance of a specimen of a creeping plant that reached him in Sweden from the Cape Colony (repens means creeping).

Thunberg, student and follower of Linnaeus, later named the plant P. mellifera, meaning honey-bearing. This was done on account of the copious production of sweet nectar occurring in the flowerheads. This juice was eagerly collected by early colonists, the indigenous population and still by the honey bees.

Unfortunately the date of the more appropriate name was documented later, therefore not retained in accordance with the conventions of botanical nomenclature (Rourke, 1980).