Home » GENERA P » Protea » Protea repens on the Kogelberg by the sea
Back to Category Overview
Total images in all categories: 11,241
Total number of hits on all images: 5,956,009

Protea repens on the Kogelberg by the sea 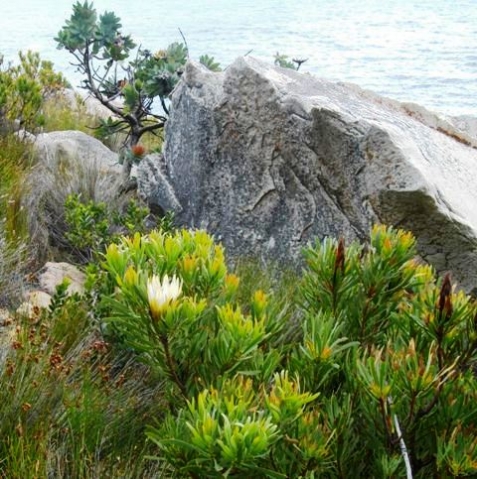 The common sugarbush is an erect shrub that grows up to 4 m. It flowers generously through the colder months and to some lesser extent throughout the year. The bud often glistens in the sunlight with escaping nectar and opens into a neat, conical cup replete with numerous erect florets. The flowerhead has acutely pointed hairless involucral bracts. Their colour varies among white, shades of pink to red or tipped with pink. The leaves are hairless, narrow or spatulate to oblanceolate.

This was the first Protea ever to be grown to flowering stage outside South Africa. This happened when Francis Masson introduced some plants into Kew Gardens in 1774. They flowered around 1780, followed by the plant’s introduction into Australia, New Zealand and California more than a century later.

Protea repens has one of the largest natural distributions of all the Cape Protea species, ranging from Niewoudtville southwards to the Cape Peninsula and eastwards along the south coastal and mountain fynbos to Grahamstown. The plant is cold resistant, also growing on the higher mountain slopes to near the snowline; to the extent that one can speak of a snowline in South Africa. Apart from the flower colour variations, there are also regional size variations, notably the smaller form found near Ladismith (Rourke, 1980; Eliovson, 1973).

This plant was found growing next to the P. nitida, also in picture, on the far western slope of the Kogelberg above Clarence Drive.