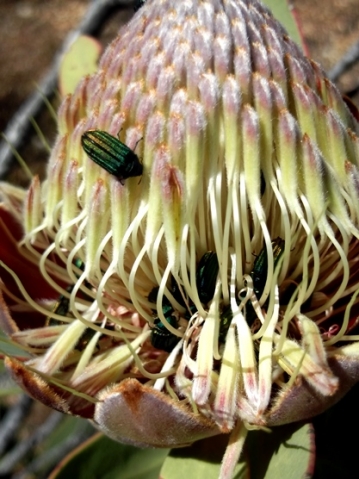 The rounded upside-down cone of silky Protea punctata perianths still cohere in the centre of the flowerhead, about 2,5 cm in diameter. Earlier, the flowerhead was narrowly cylindrical.

The pollen presenters are covered by the perianths in their bud stage, contrasting against the peripheral open flowers where pollinators already feast among the collapsed perianth remains above the sagging involucral bracts.

The curved, semi-released styles may be assisted by visitor movement in escaping faster from the captivity of the perianth tip, straightening and holding their pollen presenters high for maximum physical contact with any passing traffic… all in accordance with the big plan sustaining their little world. This plan provides for pollinators who consider themselves to be diners only (Rourke, 1980; Coates Palgrave, 2002; Manning, 2007; iNaturalist).